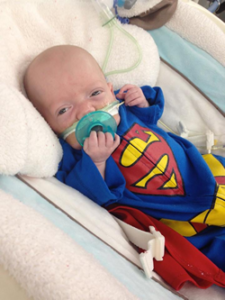 Bennett’s the reason why our foundation exists and we love him to pieces. As some may know, we have been quite private sharing our story while we were supporting Bennett through the NIICU and his cancer diagnosis. But with healing comes hope and acceptance- and one adorable reason to celebrate resilience.

In April of 2013 Mary and Greg Pellegrino were excited to hear they were having a baby boy. Due in September, Mary was having a comfortable pregnancy. Mango and avocado cravings along with periods of exhaustion were the worst of her symptoms. In June she began to experience pain in the upper right quadrant of her chest, and while teaching she felt ‘funny’. A quick trip to the school nurse confirmed her suspicion, something was wrong. With a blood pressure of 166/110, Mary was admitted to Abington Hospital with HELLP Syndrome. She was only 25 weeks along in her pregnancy. The next day, Bennett was born. Weighing in at 1 lb 2 oz and 12 inches long, Bennett was considered a micro preemie. Mary remained in the hospital with Bennett while doctors worked to stabilize her. When she was finally discharged, Bennett’s struggles began. He was diagnosed with an intestinal perforation requiring immediate surgery. He was transported to the Children’s Hospital of Philadelphia and for the next 7.5 months, Mary and Greg prayed at his bedside while Bennett fought to live. It was the most difficult time of their lives. Multiple surgeries, interventions, and 1,000 prayers later, Bennett was discharged and ready to come home.

For the next two years, Bennett has grown into his own little man. He has continued to show his family just how much of a fighter he really is, and how much he loves life. Amongst his many doctor visits, therapy sessions, and hospital admissions he has enjoyed trips to the zoo, the aquarium, and Acadia National Park. He has spent time enjoying swimming, eating at Ted Montana’s, playing with Elmo, listening to Sam Smith, and playing in the spray park.

As Mary and Greg began preparing for Bennett to attend preschool, Bennett started developing fevers. At first these fevers would come and go, or would go away with medicine. Soon they began to stay, and doctors didn’t know why. Back at the Children’s Hospital of Philadelphia, they ran tests and found a mass on his liver that was the size of a softball. He had a hepatoblastoma, a rare form of liver cancer requiring surgery and chemotherapy. Mary and Greg found themselves again praying at his bedside while he fought to live. He spent his spring and summer recovering from surgery and fighting the side effects of his chemotherapy. Mary and Greg rescheduled his Superman themed third birthday party from a weekend in June to August in the hopes that he would be feeling well enough to go. On the morning of his party, his doctors shared that he was considered in remission. Bennett, Mary, and Greg were able to celebrate surrounded by their loved ones.