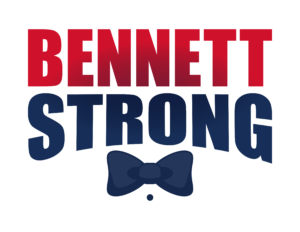 The BennettStrong Foundation is proud to announce the date of the foundation’s third annual gala, which is set for Saturday, February 29, 2020 at the Northampton Valley Country Club in Richboro, Pa. BennettStrong raised nearly $7,000 at the second annual gala this past February as the foundation once again hit its goal to continue the funding of the parent survival kits in the N/IICU. Phase one of the kits include journals and a pen that have officially been distributed to families at CHOP for just over a month. The purpose of the journals is to give parents a means to write down thoughts, doctor notes or even questions they may have about their child.

February’s gala featured keynote speaker Brian Tretola, a former N/IICU parent who spent nine months at CHOP’s N/IICU with his daughter Harper who is now five years old. Tretola spoke about his journey through the N/IICU with his wife, Rachael, and Harper and how important journaling was to him. Marisa Pilla, Sports Broadcaster and Philly Native, served as emcee of the event, while New Solutions Entertainment provided the musical entertainment for the evening.

Tickets for the third annual gala can be purchased by clicking, here.

The mission of the BennettStrong Foundation is to provide support to families of medically complex children. For more information visit our website at bennettstrong.org or stay up-to-date with the foundation by liking us on Facebook and following us on Twitter.